Here, on our official web site, you will find the best prices on the internet for our hotel.

Check out our offer HOT DEAL:

-20% reduction on our best price availible

-breakfast included in the price

A little memory of our past....

“It was close to the subway and not all to far from centrum.“

“Room was very clean. Metro within a few steps.“

“Every thing was very clean .. The bed. Nearby the metro and quiet part off Paris.“

“We really loved the hotel. Best location! close to metro and shops and restaurants.“ 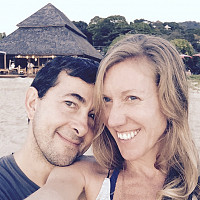 Native of Sacramento, California, Christina came to Paris more than 20 years ago to study French. A very short time into her stay she met her future husband, Laurent, a true Parisian who was working at the time in the hotel which was hosting the group of American visitors. Christina didn’t speak French but Laurent’s English was good thanks to a one year stay in the USA. Christina ended up staying in Paris while all her fellow travelers returned to the States as Laurent had convinced her to stay longer and longer until they finally married four years later.

Laurent’s family, who has a long history in the hotel business, motivated the young couple to start their own. Convinced that hotel life was the way to go, they started their search for what was to become their home, their baby, their dream. Along with Laurent’s parents, they found and bought Hôtel de la Porte Dorée in 2000. The hotel, an old residential hotel, located in a 19th century building, was in very poor shape. It had been owned by the same people for 60 years and was mainly home to an undesirable crowd.

It took a lot of effort and renovation work to take it to the boutique green hotel it is now: years of renovations including installing bathrooms in every room, painting the hotel, consolidating, finding furniture etc. Not wanting to go for the classic, boring and mostly expensive hotel furniture, they decided to go treasure hunting!  Laurent’s father went to work on every piece of furniture. Every table, chair and headboard–has been sanded back, stained and reupholstered. This is all truly Made in France!

In 2001, the new Hôtel de la Porte Dorée was launched! Unfortunately the great enthusiasm that came with it was very quickly shadowed by September 11… However, a few months later, an article was published in the Sacramento Bee paper, immediately drawing attention to the hotel and taking it a step further! The article was syndicated in newspapers across America and soon enough, emails started coming in, followed by letters, cards and gifts–all from strangers wishing them well. And then, the bookings started coming in.

Christina and Laurent have been working constantly on improvements and continuous renovations to always make the hotel better and better. In 2011, it acquired its third star and shortly after, was labelized “Green Key”. Family friendly, charming, comfortable and one of the first boutique hotels in Paris to go green!